The Olynyk Twins do everything together.


The twin’s strength, courage and determination are an inspiration and serve as a driving force behind Team Spaghetti Factory, a five member group from Victoria, BC cycling in the Ride to Conquer Cancer, June 15-16, 2013. The ride is an annual cycling benefit from Vancouver to Seattle, where thousands ride to raise millions for the BC Cancer Foundation. 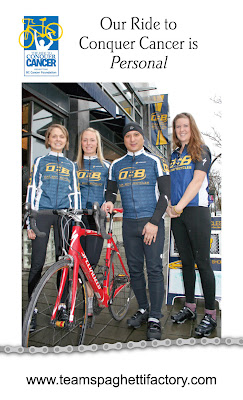 The twins were registered to ride in the 2011 cancer benefit with Team Spaghetti Factory but withdrew when they were forced to return home to Saskatchewan when their father died suddenly. While home and still grieving for their father, Stacey fell ill and was diagnosed with Hodgkin lymphoma. She underwent 4 rounds of chemotherapy followed by 4 rounds of radiation. Stacey is now cancer free.


A year and a half later, while celebrating Stacey's cancer free year, twin sister Karen was also diagnosed with Hodgkin lymphoma. Suddenly the twins roles were reversed. Karen has completed 4 rounds of chemotherapy. Karen is also now cancer free.

In December 2012, in the middle of Karen's fight, Stacey's thoughts returned to the ride which circumstances forced the twins to abandon.

"Having been through cancer and having seen my sister go through it, I wanted to put an end to this," says Stacey.

"I want to see a cure."
Stacey sent a text message to Mike Gonzalez, her former employer at the Victoria Spaghetti Factory to see if there were any interest in making the ride again.

"Let's do this!" she wrote. The response was quick. 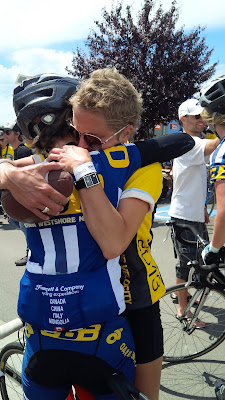 Team Spaghetti Factory was re-formed,
One More Ride, to keep a promise to ride with Stacey when she was healthy, to celebrate her victory and to dedicate the ride to her twin sister Karen – inspired by her strength, courage, bravery, fight.

The twins want this ride to deliver a message of hope.

"Don't ingnore the simple things in life, the little beauties, hold on to them, embrace it," Karen declares.

"Things do get better, brighter than before, go for what you want," believes Stacey.

The Olynyk twins do everything together.

In June, Karen will be at the finish line when Stacey crosses it and both will know they have conquered cancer together.